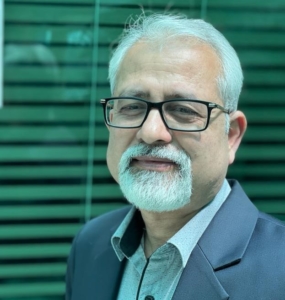 Mr. Vimal Sachdeva holds a Master’s Degree in Chemistry as well as a Post Graduate Diploma in Pharmaceutical Technology and Business Management.

He has more than 30 years of pharmaceutical industry experience including 15 years as a regulator of health products. Before joining WHO, Mr Sachdeva worked with the Singapore Health Sciences Authority (HSA) as a Senior GMP Auditor and Senior Regulatory Specialist and a member of the Quality Control Advisory Committee (QCAC) appointed by the Minister for
Health of the Republic of Singapore.

Upon leaving Singapore HSA, Mr Vimal Sachdeva has been working as a Senior Inspector with the WHO PQT (for medicines, vaccines, IVDs and diagnostics) since 2010, in Geneva, Switzerland. Under WHO PQT, Mr Sachdeva has been the Lead Inspector for many audits of facilities manufacturing Active Pharmaceutical Ingredients (APIs) and Finished Pharmaceutical Products (FPPs), Vaccines, Contract Research Organizations (CROs) and National Pharmaceutical Quality Control Laboratories. To date, he has performed more than 200 inspections in Asia, Africa, Latin America, and North America.

Mr. Sachdeva is a highly sought-after speaker and he has been frequently invited to present papers in the field of GMP, GCP and GLP at various international conferences in Singapore, India, China, Switzerland, Denmark, South Africa, Iran, Zimbabwe, Ethiopia, Namibia, Japan and Indonesia. He also co-authored papers on GMP and supply chain integrity of active pharmaceutical ingredients (APIs) and pharmaceutical excipients published in ISPE Pharmaceutical Engineering in 2014. In 2017, one of the papers which Mr. Sachdeva coauthored, was awarded the ISPE Roger Sherwood Article of the Year.

In addition to speaking at international conferences and contributing papers and articles to international scientific journals, Mr. Sachdeva has also conducted several trainings and workshops in various parts of the world. Recently, he was invited by the Generics and Biosimilar Initiative (GaBI) based in Brussels as a Workshop Co-Chair, in addition to his role as a speaker-cum-moderator for the 2nd ASEAN Education Workshop on GMP Inspection for Biologicals/Biosimilars held in Jakarta, Indonesia. Mr Sachdeva was invited by the DukeNational University of Singapore (NUS) as a faculty for the Graduate Certificate in Pharmaceutical Regulations organised by the Duke-NUS Centre of Regulatory Excellence (CoRE) in Singapore on Health Products including Biologics.