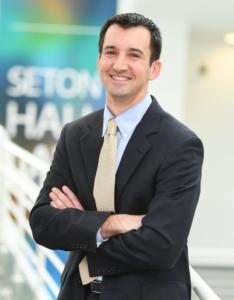 Professor Elberg teaches in the areas of Health Law, Health Care Fraud and Abuse, Evidence, and Data Analytics. His areas of interest include corporate crime and compliance, the role of various actors in the enforcement of health care fraud laws and regulations, and criminal justice policy. Professor Elberg also serves as a faculty advisor for Seton Hall’s Healthcare Compliance
Certificate Programs around the world.

Prior to joining Seton Hall Law School, Professor Elberg served for 11 years as an Assistant U.S. Attorney at the U.S. Attorney’s Office for the District of New Jersey. As Chief of the Office’s Health Care & Government Fraud Unit for five years, Professor Elberg led one of the largest and most impactful health care units in the country, supervising a team of 15 AUSAs and directing all of the Office’s criminal and civil investigations and prosecutions of health care fraud
offenses, including investigations and prosecutions of fraud against the government and private health insurance plans, illegal kickback schemes, violations of the Federal Food, Drug & Cosmetic Act, and the improper diversion of prescription drugs including opioids, as well as all health care-related actions brought by the Office under the False Claims Act. In addition,

After graduating law school, Professor Elberg clerked for the Honorable Nancy Gertner, United States District Court for the District of Massachusetts, and then practiced law as an associate at the firm of Dwyer & Collora LLP (now
Hogan Lovells) in Boston, where his areas of practice included white collar criminal defense, internal corporate investigations, and general commercial litigation. He is a member of the Massachusetts, New Jersey, and New York Bars.